The Benefits of Wind Turbines 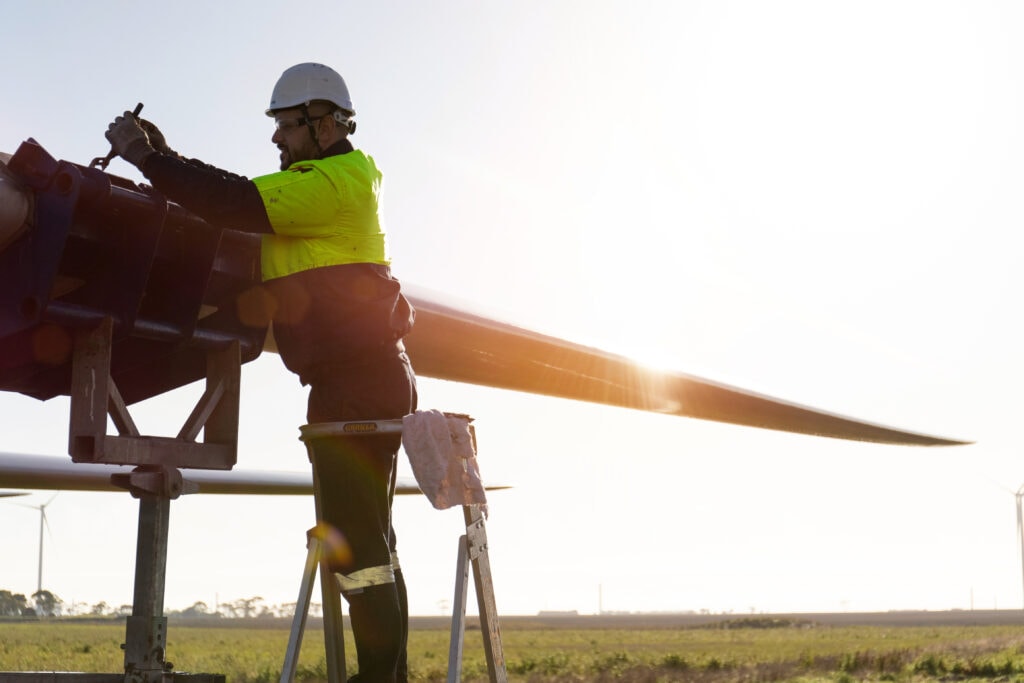 Not only is it possible to produce wind energy anywhere in the world, but wind power has the potential to produce up to 40% of Australia’s electricity needs alone. Efficiency, affordability, and sustainability make wind power one of the best ways to reduce greenhouse gas emissions and lower reliance on fossil fuels.

While one of the main advantages of the wind turbine is the availability of wind in nearly any location, the advantages of wind power go far beyond that. Increased use of wind turbines for wind energy production has the potential to completely and continuously transform the world’s energy use.

The Biggest Advantages of Wind Turbines

Wind energy is one of the lowest cost electricity generation technologies available. As conventional fossil-fuel industries attempt to compete with wind energy production, the cost and performance of wind turbines continuously improves.

As development of wind turbines improves, their ability to produce more energy at a lower cost rises, outpacing the generation of other forms of energy at a fraction of the cost.

Wind power technology has advanced leaps and bounds over the past decade, allowing the cost of wind turbines to fall by nearly 40% over the last several years. Despite this decrease in cost, production only continues to increase as bigger turbines are developed that allow for maximum output, even in areas with lower wind speeds.

Since wind is free, operational costs are nearly zero after a turbine is erected. The affordability of wind energy production means that it is equally cost effective for the consumer, making it a highly sought after power source.

Renewable energy is energy derived from earth’s natural resources instead of relying on finite, exhaustible fossil fuels. Additionally, renewable resources have a significantly lower harmful impact to the environment.

Wind energy is one of the primary sources of renewable energy, reducing the need for fossil fuels that contribute to rising levels of greenhouse gases.

As the worldwide effort to combat climate change rages on, renewable energy is seeing a boom in growth, with wind energy leading the way. From 2000 to 2015, wind capacity around the world dramatically increased, with China surpassing the EU for largest number of installed wind turbines. China has continued to hold that lead in the last five years.

The increased use of wind turbines suggests that there is a growing demand for renewable energy, a cleaner and more efficient substitute for fossil fuels. Unlike fossil fuel production, wind energy does not emit toxic substances or contaminate water, making it a critical tool for preserving other valuable resources, as well.

3) Wind turbines are safe and wind energy is non-toxic

There are plenty of myths surrounding wind turbines. Though speculation has long circulated that wind turbines are bad for human and animal health, the evidence behind these claims is largely unfounded.

Noise and health concerns are often brought to the table, but industry and government-sponsored studies in Canada and Australia have found that these concerns do not have an impact on public health.

Despite this, wind turbines are continuously improved upon to minimize impact on local communities and there are strict guidelines in place to ensure noise control.

Additionally, there are no wildlife or pollution side effects to wind turbine construction or wind energy production. In fact, the production of renewable energy is one of the best ways to fight against climate change and improve the environment overall.

The WHO has estimated that climate change already causes over 150,000 deaths annually and that unmitigated greenhouse gas emissions will only continue to fuel this number. In 2014, wind energy was estimated to help Australia cut its GHG emissions by over 3 million tonnes each year, making a strong case for increasing the nation’s focus on wind energy in order to continue to reduce greenhouse gas emissions.

Wind energy is a native energy, meaning it is available practically anywhere on the planet. The accessibility of wind energy means that it contributes to reducing energy imports and to creating wealth and local employment.

The renewable energy sector has grown rapidly over the last several years, with capacity for advancement and investment only continuing to grow. Construction and installation jobs are already abundant. By 2035, the industry is expected to grow to encompass a wide variety of permanent operation and maintenance roles, especially in the wind sector. This growth is expected to double the current number of available jobs related to renewable energy.

Renewable energy jobs provide enormous benefits for both individual communities and the economy, allowing for job opportunities outside of metropolitan areas. With more need than ever for sustainable jobs and opportunities that positively impact the economy, wind energy is a local, sustainable way to improve lives all over the world.

5) They contribute to sustainable development

One of the United Nations’ sustainable development goals is affordable and clean energy. Energy is the primary contributor to climate change, accounting for 50% of total global greenhouse gas emissions.

The greater the emphasis on renewable energy, the more sustainable other industries can become by reducing their carbon footprint and continuing to reduce the use of fossil fuels and other limited resources. Wind energy is renewable and inexhaustible, making its efficient use a key contributor to the improved well being of generations to come.

Wind turbine development offers not only cost effective opportunities for the business sector, but a unique way to contribute to long term, sustainable advancement in technology and energy production. That’s why the efficient installation of wind turbines is one of the most important components of advancing wind energy use across the globe.

Installing a wind turbine is just the beginning; the wind energy the turbine creates is the energy that will power future generations.

Back to the blog

From a small office under the Gateway bridge back

Find out how we can deliver your renewable energy project efficiently and safely.